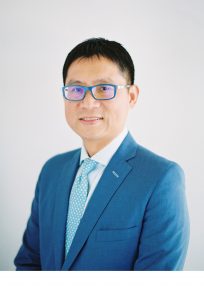 Dr. Yau has attained Board-certification in Vascular and Endovascular Surgery, General Surgery, and Internal Medicine. He attained his undergraduate education at Princeton University in 1992 and received his Medical Degree from the University of Texas at  Southwestern Medical School in 1996. He remained at UT Southwestern to complete his Residency training in Internal Medicine and General Surgery, followed by a Fellowship in Vascular and Endovascular Surgery.  He started his vascular surgery practice in Rowlett in 2006.

Dr. Yau is accredited by the American Registry for Diagnostic Medical Sonography (ARDMS) as a Registered Physician in Vascular Interpretation (RPVI), and is the medical director of the vascular ultrasound diagnostic lab.  The Vanguard vascular testing lab is the only center with certification from the Intersocietal Accreditation Commission (IAC) to perform vascular testing in Rowlett, Rockwall, Garland, and surrounding areas. Additionally, our Vein Center is the first and only IAC accredited Vein Center in the entire Dallas Metroplex area.  Vanguard has also obtained certification from the American Association for the Accreditation of Ambulatory Surgery Facilities (AAAASF).

Dr. Yau believes in caring for his patients with honesty, compassion, competence and courtesy.  At the vanguard of vascular care, Dr. Yau has assembled a small, special team leading the way in the innovative treatment of our patients with arterial and venous problems.